Inspirational Power: “If one person can do it – anyone can.”  This one-woman protest against 300 uniformed neo-Nazis has become a symbol of defiance against Sweden’s right wing. “Hell no, they can’t march here!” said Tess Asplund, whose photo has gone viral. [Source – AJ+ is a global news community for the connected generation. They highlight human struggles and achievements, empower impassioned voices, and challenge the status quo. They bring you the stories that are shaping our world.]

Mississippi has gotten a lot of bad press in the past year for its in-school corporal-punishment practices, which is perhaps one reason its State Board of Education announced last week its plans to propose its first-ever policy regulating the restraint and seclusion of students, according to the Associated Press.
Under pressure from special-education advocates and civil-rights groups, such policies have proliferated in recent years, and Mississippi remains one of the last states with no guidelines governing the use of restraint and seclusion in schools in response to behavior problems (New Jersey, surprisingly, is another).
And in case you’re wondering what exactly “restraint and seclusion” might look like in a school setting, Mississippi has furnished us with some stunning examples, like when teachers handcuffed kids to the metal railings of the school gym for the dress-code infraction of “sagging pants,” or confined an overexcited first-grader to a three-sided pen on his eighth birthday. (“If I had that contraption in my house,” the mother of the boxed eight-year-old was quoted in the Clarion-Ledger as saying, “and my child told his teachers, ‘My mom puts me in a box when I’m bad,’ I would have been arrested and my kids would have gone to foster care.”)

According to the Clarion-Ledger story, in the 2011–12 school year alone, nearly 1,000 students were restrained or secluded in Mississippi schools, though that number is probably much higher, since data is self-reported and spotty, and districts aren’t required to track these incidents.

END_OF_DOCUMENT_TOKEN_TO_BE_REPLACED

Lead is a poison that affects virtually every system in the body. It is particularly harmful to the developing brain and nervous system of fetuses and young children.

Flint, Michigan is in the midst of a serious public health crisis, with high levels of lead in its water supply. President Obama signed an emergency declaration ordering federal assistance to support state and local response efforts. With the emergency declaration in place, the U.S. Department of Health and Human Services (HHS) has now been designated the lead federal agency responsible for coordinating federal government response and recovery efforts. This means that HHS will, in collaboration with the Federal Emergency Management Agency (FEMA), identify and mobilize the capabilities of the rest of the federal partners. (Source: FEMA.gov and HHS.gov Both outline recovery overview) .

Given the severity of their exposure to lead poisoning, its the devastating effect on every system in their small bodies, and the life-long health consequences the children of Flint Michigan need long-term help from FEMA and HSS which can be achieved by Emergency Support Function #14 – Long-Term Community Recovery Annex . According to the World Health Organization, “lead affects children’s brain development resulting in reduced intelligence quotient (IQ), behavioral changes such as shortening of attention span and increased antisocial behavior, and reduced educational attainment. Lead exposure also causes anemia, hypertension, renal impairment, immunotoxicity and toxicity to the reproductive organs. The neurological and behavioral effects of lead are believed to be irreversible.”

Please Sign the Petition asking the federal government to increase its emergency response to include ESF #14.

More information on the Flint Water Crisis, lead poisoning and the impact on children is listed below.

Experts who blew the whistle on lead-contaminated water in Flint, Michigan, and its impact on children said some kids had blood lead levels far higher than those US health officials consider “elevated” – and that the state knew kids were being poisoned.

DR. MONA HANNA–ATTISHA: (Pediatrician at the Hurley Medical Center) So, in late August, we were hearing reports from the Virginia Tech group that there was lead in the water. And when pediatricians hear about lead anywhere, we freak out. We know lead. Lead, as you said, is a known potent, irreversible neurotoxin. So we wanted to see if that lead in the water was getting into the bodies of children. So that’s when we started doing our research.

And what we found was alarming, but not surprising, based on what we knew about the water. The percentage of children with elevated lead levels tripled in the whole city, and in some neighborhoods—actually, it doubled in the whole city, and in some neighborhoods, it tripled. And it directly correlated with where the water lead levels were the highest. So we shared these results at a press conference, and you don’t usually share research at press conferences. It’s supposed to be shared in published medical journals, which now it is. But we had an ethical, moral, professional responsibility to alert our community about this crisis, this emergency. (Source: DemocracyNow.org)

That is more than seven times higher than the level classified as “elevated” by the Centers for Disease Control and Prevention (5 micrograms). The CDC states there is no safe blood lead level in children.

Range of Effects of Lead

Very severe lead exposure in children (blood lead levels > or = to 380 µg/dL) can cause coma, convulsions, and even death. Lower levels cause adverse effects on the central nervous system, kidney, and hematopoietic system. Blood lead levels as low as 10 µg/dL, which do not cause distinctive symptoms, are associated with decreased intelligence and impaired neurobehavioral development. Many other effects begin at these low blood lead levels, including decreased stature or growth, decreased hearing acuity, and decreased ability to maintain a steady posture. (Source: Centers for Disease Control and Prevention)

Lead is a neurotoxic substance that has been shown in numerous research studies to affect brain function and development. Children who have been exposed to elevated levels of lead (>10 ug/dl) are at increased risk for cognitive and behavioral problems during development (CDC, 1991).

The outcome is often quite debilitating and include poor academic learning and performance as well as problems with the development of appropriate social relationships. (Source: Mt Washington Pediatric Hospital) 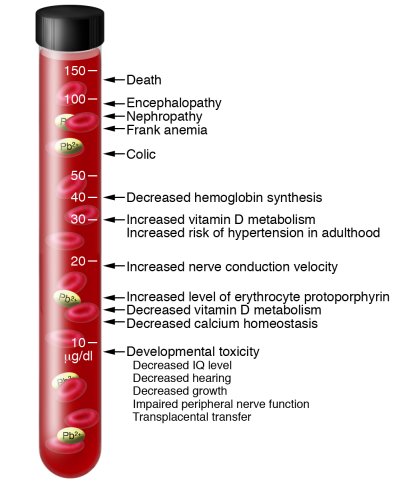 According to the World Health Organization, “lead affects children’s brain development resulting in reduced intelligence quotient (IQ), behavioral changes such as shortening of attention span and increased antisocial behavior, and reduced educational attainment. Lead exposure also causes anemia, hypertension, renal impairment, immunotoxicity and toxicity to the reproductive organs. The neurological and behavioral effects of lead are believed to be irreversible.”

Come hula-hoop with me at Romare Bearden Park this Saturday at 1pm! Tons of fun for everyone! Cara Zara